ATLANTA, GA - A Dutch Colonial estate at 3359 Woodhaven Road in Buckhead’s exclusive Tuxedo Park neighborhood sold quietly on Aug. 29 for $4.6 million. The five-bedroom, seven-bath, mansion on one acre was purchased in 2014 by Dan and Cindy Smith and renovated top-to-bottom. Nicholas Brown of Beacham & Company, REALTORS represented the buyer who was not disclosed. 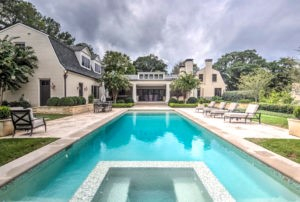 The home, distinguished by Texas limestone walls and columns, is nestled behind wrought iron fencing and handmade mahogany gates. It was originally built in 1980 and updated in 2007. There were 6,500 square feet before the current renovation and 8,000 upon completion. The renovation was done at the direction of architect Peter Block with builder Brad Bernard and designer Danielle King Chizzolin. Landscape architect Alec Michaelides with Land Plus directed the remaking of the grounds. 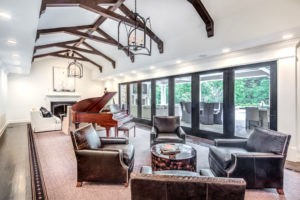 In recent magazine interviews, the sellers gushed about their satisfaction with the final result of the renovation process, but in particular about the transformation of the outdoor spaces and the home’s relationship to them. They considered the addition of a vast covered loggia accentuated with a stunning, light-filled cupola over an outdoor fireplace, kitchen and dining area as a signature piece of the renovation.  The sellers had much of the rear wall of the home removed and replaced with 27-foot sliding doors that open from the great room onto the loggia to create an on-demand blend of indoor and outdoor living. The loggia decking features a compound material made of crushed granite that extends to the nearby pool, which was reconfigured during the renovation and surrounded by newly planted formal gardens with a fountain and bocce ball court. 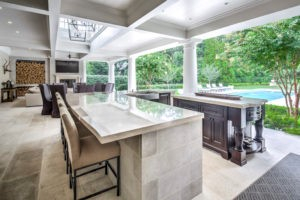 The interior makeover features “a modern take on classical forms,” according to Chizzolin, with a paint palette that is for the most part a transitional-inspired white and pale grey; accentuated by rich, exposed wood beams and stained doors. The kitchen is by Galleria Kitchen and features double islands and cabinetry from Duquette, which was also sourced for all wood paneling and millwork throughout the home. The home’s oak floors were stained in Expresso, while marble was installed in the foyer, mudroom and tasting room. The renovation also included the addition of an art studio/in-law suite and a completely redone terrace level with wine cellar and tasting room, media/game room, steam room, cigar humidor and full bar.

The sale would rank as the sixth-highest sale of 2017 if recorded in the local MLS. Of those six sales, all $4.6 million or more, Beacham & Company was involved in half. Beacham & Company is the top-selling office in Atlanta for homes priced more than $2 million and its agents are the top producing by dollar volume sold in the state.