SEATTLE, WA USA – Gold medal-winning goalie with the Canadian women’s Olympic hockey team, Sami Jo Small is a force of positivity in the dressing room, on the bench, and on the ice. Her enthusiasm and dedication has brought her team to victory again and again, and now she has been selected as a speaker at the 22nd Annual Luxury Real Estate Fall Conference this October. 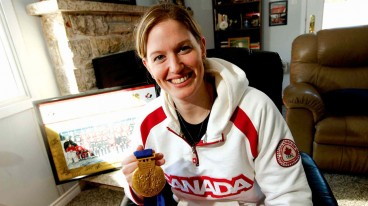 Sami Jo has won five World Championships, twice been named championship MVP, and is a three-time Olympian, who played on two gold medal-winning teams. After a lifetime of training for the “Big Game,” in the Salt Lake City Olympics in 2002, Sami Jo Small never got to play in it. “The biggest difference between myself and other Olympians,” says Sami, “is the whole idea of being placed in situations that were not the way I had envisioned living my Olympic dream. Not playing in the final game in Salt Lake forced me to focus on the accomplishment of the team above my own feelings.”

This is what she will speak on at the Fall Conference – the role of the individual as a part of the team and how every member, regardless of their role, is needed to succeed. Sami Jo is now the owner of a hockey school that runs throughout four Canadian provinces. She also helped start the Canadian Women’s Hockey League, where she continues to play elite hockey for the Toronto Furies.

In October, Who’s Who in Luxury Real Estate members will convene in Toronto, Canada for the 22nd Annual Luxury Real Estate Fall Conference. In addition to Sami Jo’s presentation, conference attendees will engage in insightful breakout sessions, explore the local real estate market with a luxury property tour, and connect with peers and friends in the international network.

A worldwide collection of top brokers representing the finest luxury properties across the globe, Who’s Who in Luxury Real Estate has been leading the real estate industry since 1986. This hand-selected group of more than 130,000 professionals with properties in more than 70 countries collectively sells over $300 billion of real estate annually, making it the most elite and comprehensive luxury real estate network in the world.

Who’s Who in Luxury Real Estate’s global network is showcased on LuxuryRealEstate.com, which remains the #1 portal for luxury properties on the web and has more $1,000,000+ content than any near-peer. The company has been recognized as a leader in the industry by Forbes, The Webby Awards, Web Marketing Association, Maggie Awards, ADDY Awards, the Inc. 5000 List, and more.