During the third quarter, real estate in Manhattan and Brooklyn stayed the course. While the market did experience, as it often does, a post-Memorial Day slowdown from the feverish pace of the spring, deals were made consistently throughout the summer. This market is defined by its ongoing lack of inventory. The inventory shortage has driven price levels in most established Manhattan neighborhoods close to, at, or in some cases above the highs of 2006 and 2007. In Brooklyn, prices are higher than ever before, and seen to be accelerating daily!

One of the interesting characteristics of this strong market is its price sensitivity. Even in the most desired neighborhoods, buyers remain vigilant. Overpriced properties will still sit on the market for months, even as similar offerings priced 10% lower engender competitive bidding and sell in overbids. It seems anomalous that buyers can be both eager and careful at the same time, but that is the market. Even buyers who have lost other properties in competitive situations have clear limits if they feel that are being asked to overpay.

As has been true throughout the year, different segments are performing in different ways. As everyone who reads the newspaper knows, the new condominium market is still sizzling. Wealthy purchasers from all around the world have bought units at One FiftySeven, at 432 Park, at Walker Tower and at 150 Charles, and at a number of other new buildings around town which are under construction with grand spaces, high ceilings, and luxurious amenities. Interestingly enough, older condominiums, which increasingly tend to have Board requirements similar to co-ops, are now behaving more like co-ops pricewise. And the brisk trading in ultra-luxury new condos has led many high end co-op owners to overvalue their properties. The target audiences are completely different, with most ultra-luxury co-ops seeking full time residents with substantial, discoverable assets in this country. Those American, frequently local buyers are, in general, both more cautious and more price sensitive. So we see many of these co-ops in the $10 million and above price range lingering for many months or even years on the market, thus inflating the supply at the higher end.

The following chart provided by UrbanDigs.com shows the trajectory of the $5 million and up market for the last year: many units closed in December, bringing availability down to 560 units as of January 2013. Then, in spite of the brisk trading pace elsewhere, inventory in this sector climbed steadily until July, when sellers began taking their unsold properties off the market. As of September, those properties (and others) are being listed again, driving availability up once more. 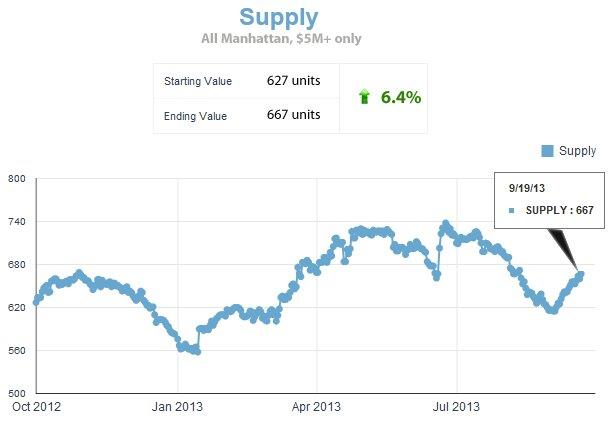 Markets all over town are exceptionally active between $2 million and $8 million. These two, three, and four bedroom homes are highly sought after by committed New Yorkers, by families NOT moving to the suburbs, and by empty nesters RETURNING from the suburbs. With inventory low, apartments and townhouses, regardless of condition as long as they are fairly priced (and compellingly staged!) trade within a few weeks. Multiple offers on many of these properties lead to best and final situations in which each buyer vies to put not only his best offer but also his best financial and social foot forward. It is not unusual today to meet buyers who have been looking for six, eight, or even twelve months, waiting for appropriate properties to surface and then chasing them, often unsuccessfully. This tightness of supply creates an unforgiving environment for those unable to make the best offers, with the best financials and the strongest social connections.

In Harlem, the unsold condo inventory from four years ago is completely absorbed and new properties coming onto the market sell in a heartbeat. Year over year prices have risen between 15 and 20%, and the fever is spreading north into the 130s and 140s. And in Brooklyn, buyers priced out of Williamsburg, Carroll Gardens, Boerum Hill, and Park Slope are pushing up prices in Prospect Heights, Windsor Terrace, Prospect-Lefferts Gardens and Clinton Hill. And there are multiple bids for floor through in Bed-Stuy!

Although the two bedroom market between $1 million and $2 million remains hot, there is actually inventory and choice in the one bedroom market, especially on the Upper East Side east of Third Avenue. For someone like me who was raised on the Upper East Side, the idea that young buyers now move to First and Second Avenues in the 60s and 70s, reluctantly, as a value play because they are priced out of the East Village, is extraordinary. But that is a sign of the times!

Moving forward, I anticipate a strong fourth quarter, though without the frenzy caused by last year’s tax changes. Internationally, New York real estate is still not so expensive compared to other hub cities. And here at home, continuing low interest rates and inventories will combine to keep prices stable and trending up. After all, doesn’t everyone want at least a toehold in the most vibrant, multicultural, dynamic and ever-evolving city on Earth?

You can read more on the Warburg Blog.