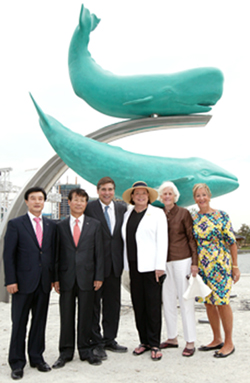 The Songdo International Business District, roughly the size of downtown Boston, is being constructed on reclaimed land near Inchon, South Korea, an easy flight from China and other rapidly developing areas of Northeast Asia. Begun in 2002, Songdo represents a $35 billion city-within-a-city near Seoul's international airport. It is one of the world's largest commercial developments.

The statue, constructed of bronze, is 18 ft in length, 15.7 ft in width and 20 ft in height, and was made by Han Jeong-ho, Head of Soto Design Architect and Lee Young-song, a famous Korean artist.

Founded in 1922, Daniel Gale Sotheby’s International Realty consistently leads the nation in achieving one of the highest average sales prices in the country. Voted Best

Daniel Gale Sotheby’s International Realty is a member of Residence, The Registry, and is on the Regents Board of “Who’s Who in Luxury Real Estate,” a global network of leading real estate companies. More information may be obtained at www.danielgale.com.