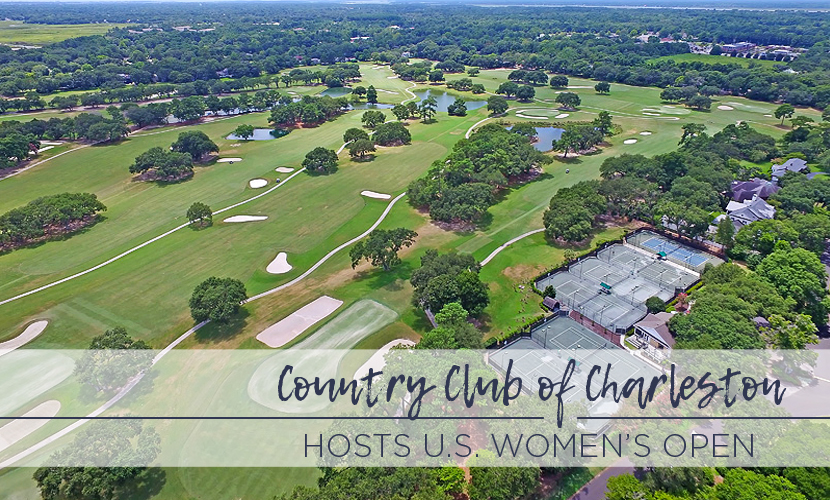 A quiet community neatly nestled along the scenic Ashley River, the Country Club of Charleston will host the 74th U.S. Women's Open Championship this Memorial Day Weekend, May 27 - June 2. The prestigious tournament attracts the top LPGA tour players from around the world and promises to be an exciting event. Single day tickets and weekend packages can be purchased via the USGA website.

The Country Club of Charleston

Situated directly across the Scarborough Bridge in James Island, the Country Club of Charleston overlooks the scenic Ashley River and the iconic downtown cityscape. Lined by majestic grand oak trees, the community is comprised of southern-style single family homes, many of which boast views of the immaculate golf course or wide waterway. The club itself dates back to 1786 when Scottish merchants gathered on Harleston Green for a friendly game of golf.

In the early 1900s, the club moved to Belvidere Plantation and then settled at its current location along the Ashley River in 1922. Encompassing 900 acres of the McLeod Plantation, the Country Club of Charleston remains true to its humble beginnings and original purpose: traditional golf. In fact, “it’s one of the oldest golf clubs in North America,” notes Ryan. “The course is an old-time classic with challenging greens and tough bunkers.” Moreover, the course exudes an “old school charm” with century-old oak trees canopying the pathways and fairways flanked with views of the Wappoo and Charleston Harbour.

An unpretentious club with fine amenities, this Charleston golf community does not require its residents to be members. However, the majority of residents enjoy teeing off with neighbors, playing tennis, relaxing by the pool, and dining at the clubhouse.

Many of the homes were built in the late 1960s and have been remodeled in recent years to reflect modern design trends. From open kitchens to shiplap walls, these stately homes are a rare commodity in the real estate market. Jan explains, “The close proximity to downtown Charleston cannot be replicated anywhere else off the peninsula. The community is tucked between the Wappoo and Harbour, hidden away with no through traffic.” Certainly, the convenient location, serene beauty, historic attributes, and ample amenities make the Country Club of Charleston a remarkable place to call home.

Next weekend, LPGA players will analyze the fastidious fairways, easterly winds, and baffling bunkers as they compete for the coveted 74th U.S. Women’s Open trophy at the Country Club of Charleston. This year, more than 50 professional golfers from around the world will test their abilities on arguably the biggest stage for women’s golf.

Charleston is not new to hosting nationally televised golf tournaments. In fact, the Country Club annually hosts the Azalea Invitational Tournament the week before the Master’s in Augusta. The Azalea Invitational is a national amateur tournament that features championship golfers from around the world. Of course, nearby Kiawah Island hosted the 1991 Ryder Cup at its famous Ocean Course. The notorious tournament, hailed the “War by the Shore,” was a battle between Hale Irwin and Bernhard Langer. “Irwin defeated Langer, and I was standing behind the 18th green, no more than 50 feet away from the players when the roar of the American victory echoed across the greens,” recalls Jan. “That week, the beauty and the drama of the Lowcountry was broadcasted for all the world to see and -- almost instantaneously -- there was an exponential rise in interest for our region. I expect the same to be true with the international broadcast of this tournament,” she adds.

For Ryan and his family, attending the US. Women’s Open is a once-in-a-lifetime event. “I imagine, just like Jan vividly remembers the Ryder Cup, my family and I will have memories and conversations about this spectacular event,” he says. The beauty and the drama will once again showcase the southern charm of Charleston. “We will likely have a new wave of people, both domestic and foreign, who while watching the tournament on television will decide to come visit the Lowcountry,” suggests Jan. “Yes,” agrees Ryan, “and we all know that our visitors often turn into our locals,” he jokes.

Tourists, part-time residents, and life-long natives will all enjoy attending the golf tournament and showing off their magical city. How fitting that the oldest women’s golf tournament is held at one of the nation’s oldest golf clubs. Don’t miss out on this special event. Buy your tickets today!